Welcome to Pumpkin Week on Design Improvised! Each day this week I’ll have a new no-carve pumpkin idea for you. Today we’re kicking things off with a perfect pairing – pumpkins and pom-poms! While not your traditional Halloween look, they sure are fun. 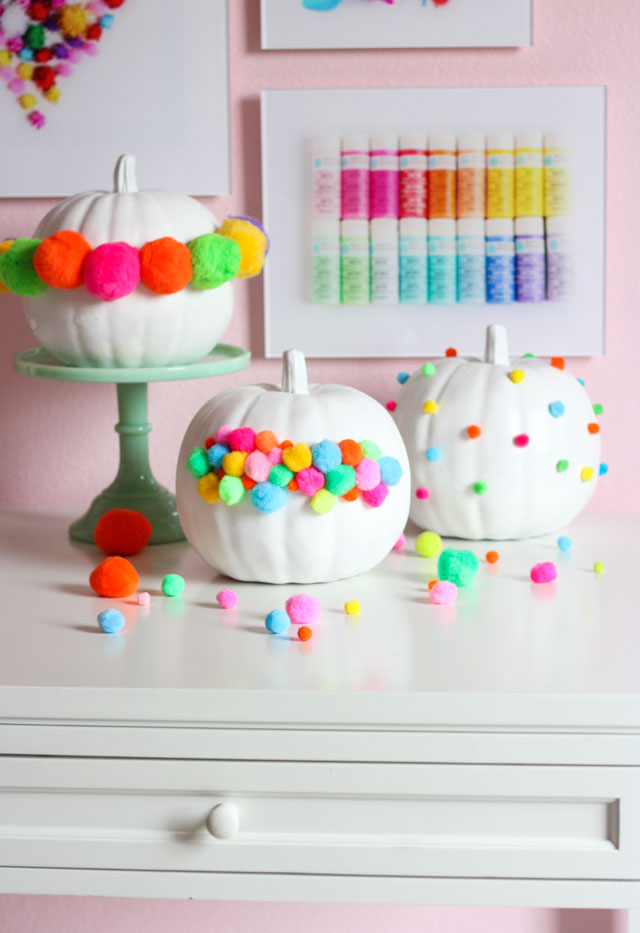 If you’re looking to mix things up with a little rainbow color this Halloween, I’ve got three fun ways to decorate your pumpkins with pom-poms. No carving, just gluing!

Pom-Pom Pumpkin #1: Bunch Them Up

1. Start by spray painting your pumpkins white (I was able to paint three pumpkins with one can of spray paint). If you are able to find white faux pumpkins you can eliminate this step!

2. Grab a variety of small and medium sized pom-poms in a bright color palette (I chose shades of pink, orange, yellow, light green, and blue). Add them to the front of the pumpkin with a dab of hot glue on the back of each pom-pom. Cluster them together to create a “wave” of pom-poms on the front (or you can keep going and wrap them all the way around the pumpkin if you want!).

For this idea I went with the biggest pom-poms I own! I used 2″ pom-poms and added them around the center of the pumpkin in a big ring. I chose a similar color palette of pink, orange, green, yellow, and blue so that it would coordinate with the other pumpkins.

Lastly, I used small 1/2 inch pom-poms to create a polka-dotted pumpkin. I just added them randomly around the pumpkin with hot glue, making sure to get a good mix of colors. You can add as many or as few polka dots to your pumpkin as you want!

My daughter Stella thought this one with the big pom-poms looks like Saturn – in a good way! It reminds me of a pom-pom crown. It would be cute with a little pumpkin face added below.

This one is my favorite – I like seeing all the colorful pom-poms bunched together!

The pumpkins look especially fun displayed as a group and are right at home in my craft room. In fact, they may become year-round decor!

Check out my other pumpkin decorating ideas!

One response to “DIY Pom-Pom Pumpkins”